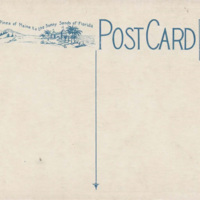 A postcard featuring a colored image of the Jenkins Orphanage Band playing at the YMCA Building in St. Petersburg, Fla. Jenkins Orphanage was established in 1891 by Rev. Daniel Joseph Jenkins in Charleston, South Carolina. Jenkins was a businessman and Baptist minister who encountered street children and decided to organize an orphanage for young African Americans.

The orphanage took in donations of musical instruments and Jenkins hired two local Charleston musicians — P.M. "Hatsie" Logan and Francis Eugene Mikell — to tutor the children in music. Upon its establishment, it became the only black instrumental group organized in South Carolina. The band's debut was on the streets of Charleston with the permission of the mayor, police chief, and Chamber of Commerce. The Jenkins Orphanage Band, wearing discarded Citadel uniforms, performed throughout the United States and even toured England raising money for the support of the orphanage. It played in inaugural parades of Presidents Theodore Roosevelt and William Taft. It appeared at the St. Louis Exposition and the Anglo-American Exposition in 1914. It toured the United States from coast to coast and played in Paris, Berlin, Rome, London, and Vienna. As many as five bands were on tour during the 1920s. The band ceased to exist in the 1980s.